An international team of researchers have sounded new alarm bells about the changing chemistry of the western region of the Arctic Ocean after discovering acidity levels increasing three to four times faster than ocean waters elsewhere. 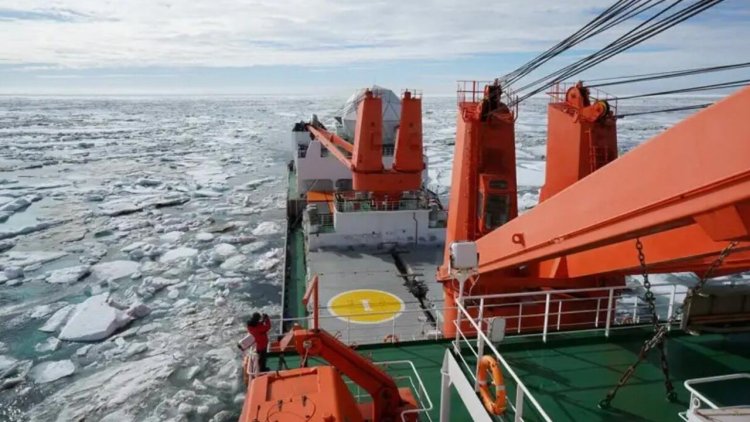 The team, which includes University of Delaware marine chemistry expert Wei-Jun Cai, also identified a strong correlation between the accelerated rate of melting ice in the region and the rate of ocean acidification, a perilous combination that threatens the survival of plants, shellfish, coral reefs and other marine life and biological processes throughout the planet's ecosystem.

The new study, published on Thursday, Sept. 30 in Science, is the first analysis of Arctic acidification that includes data from more than two decades, spanning the period from 1994 to 2020.

Scientists have predicted that by 2050—if not sooner—Arctic sea ice in this region will no longer survive the increasingly warm summer seasons. As a result of this sea-ice retreat each summer, the ocean's chemistry will grow more acidic, with no persistent ice cover to slow or otherwise mitigate the advance.

That creates life-threatening problems for the enormously diverse population of sea creatures, plants and other living things that depend on a healthy ocean for survival. Crabs, for example, live in a crusty shell built from the calcium carbonate prevalent in ocean water. Polar bears rely on healthy fish populations for food, fish and sea birds rely on plankton and plants, and seafood is a key element of many humans' diets.

That makes acidification of these distant waters a big deal for many of the planet's inhabitants.

Cai, the Mary A.S. Lighthipe Professor in the School of Marine Science and Policy in UD's College of Earth, Ocean and Environment, has published significant research on the changing chemistry of the planet's oceans and this month completed a cruise from Nova Scotia to Florida, serving as chief scientist among 27 aboard the research vessel. The work includes four areas of study: The East Coast, the Gulf of Mexico, the Pacific Coast and the Alaska/Arctic region.

The new study in Science included UD postdoctoral researcher Zhangxian Ouyang, who participated in a recent voyage to collect data in the Chukchi Sea and Canada Basin in the Arctic Ocean.

Cai said he and Qi both were baffled when they first reviewed the Arctic data together during a conference in Shanghai. The acidity of the water was increasing three to four times faster than ocean waters elsewhere. 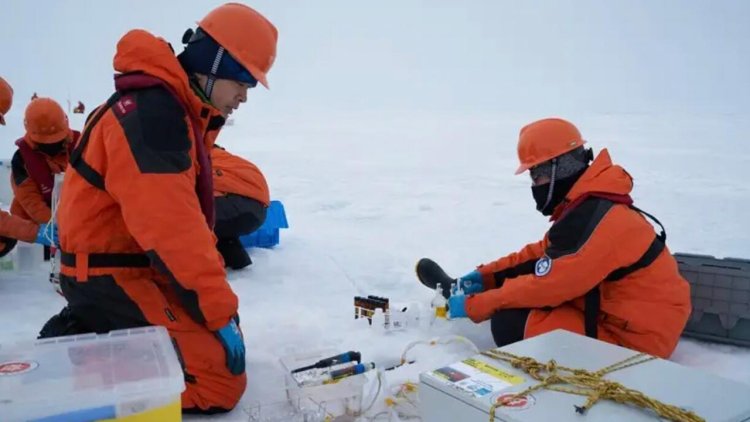 That was stunning indeed. But why was it happening?

Historically, the Arctic's sea ice has melted in shallow marginal regions during the summer seasons. That started to change in the 1980s, Cai said, but waxed and waned periodically. In the past 15 years, the ice melt has accelerated, advancing into the deep basin in the north.

For a while, scientists thought the melting ice could provide a promising "carbon sink," where carbon dioxide from the atmosphere would be sucked into the cold, carbon-hungry waters that had been hidden under the ice. That cold water would hold more carbon dioxide than warmer waters could and might help to offset the effects of increased carbon dioxide elsewhere in the atmosphere.

When Cai first studied the Arctic Ocean in 2008, he saw that the ice had melted beyond the Chukchi Sea in the northwest corner of the region, all the way to the Canada Basin—far beyond its typical range. He and his collaborators found that the fresh meltwater did not mix into deeper waters, which would have diluted the carbon dioxide. Instead, the surface water soaked up the carbon dioxide until it reached about the same levels as in the atmosphere and then stopped collecting it. They reported this result in a paper in Science in 2010.

That would also change the pH level of the Arctic waters, they knew, reducing the alkaline levels of the seawater and reducing its ability to resist acidification. But how much? And how soon? It took them another decade to collect enough data to derive a sound conclusion on the long-term acidification trend.

Analyzing data gathered from 1994 to 2020—the first time such a long-term perspective was possible—Cai, Qi and their collaborators found an extraordinary increase in acidification and a strong correlation with the increasing rate of melting ice.

They point to sea-ice melt as the key mechanism to explain this rapid pH decrease, because it changes the physics and chemistry of the surface water in three primary ways:

Cai said more research is required to further refine the above mechanism and better predict future changes, but the data so far show again the far-reaching ripple effects of climate change.

"If all of the multiple-year ice is replaced by first-year ice, then there will be lower alkalinity and lower buffer capacity and acidification continues. By 2050, we think all of the ice will be gone in the summer. Some papers predict that will happen by 2030. And if we follow the current trend for 20 more years, the summer acidification will be really, really strong."

No one knows exactly what that will do to the creatures and plants and other living things that depend on healthy ocean waters.