A highlight of the new service: the first-ever direct link between Oakland and the Middle East. 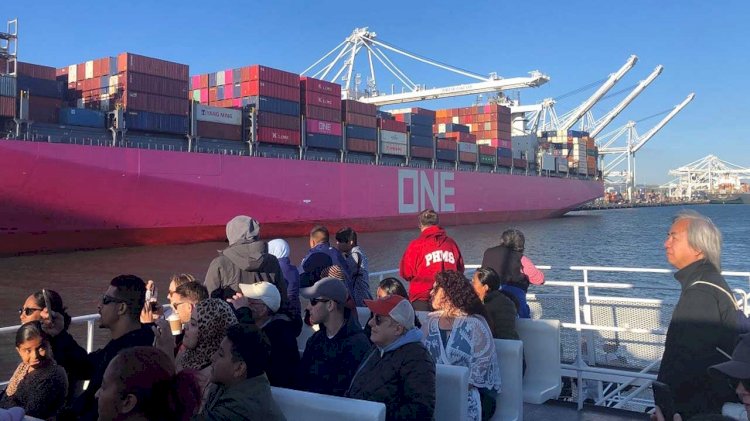 A sprawling vessel service begins this week with 18 megaships linking the Port of Oakland to Asia, including Saudi Arabia.

The Port has said that Japan’s ONE line would operate the new weekly service called the Far East-Pacific 2. The first ship in the service, the ONE Aquila, should arrive at Oakland International Container Terminal May 7.

Each of the ships in the service has capacity to carry 14,000 20-foot containers, the Port said. That places them among the largest container vessels calling at U.S. ports.

“Naturally we’re encouraged by this development. “The size of the ships means extra cargo capacity coming to Oakland and the Port rotation extends Oakland’s reach in global markets.”

The service reaches nine ports in Singapore, Thailand, Vietnam, Japan, Hong Kong, China, the U.S. and Saudi Arabia.  Stops at Saudi Arabia’s Jeddah port would be Oakland’s first direct connection to the Middle East.  Until now, ships from the Arab world transferred Oakland-bound cargo to other vessels at intermediate ports.

Two services already calling Oakland were consolidated by ONE into the Far East-Pacific 2, the Port said.  For that reason, the Port declined to project the impact of the new service on cargo volume.  The Port said that larger ships could result in more Oakland freight over time.  Adding new port calls such as Jeddah could help as well, the Port added.

The Port said it expected cargo mix on the new service to be evenly divided between imports and exports.  California farm goods exported to overseas markets should be a prominent part of the mix, the Port added.