HMM partners with PANASIA to study onboard carbon capture system

Based on research findings, HMM is expected to install the carbon capture system and perform an operational test on its vessels. 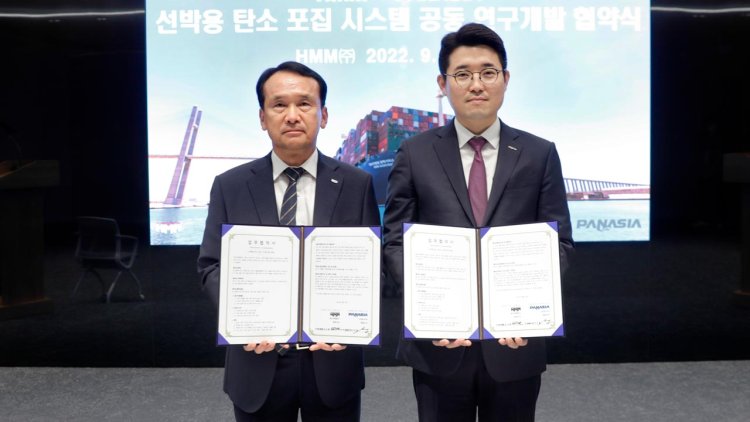 HMM announced that the company has signed a Memorandum of Understanding (MoU) with PANASIA to collaborate on onboard carbon capture system for vessel application.

Onboard carbon capture system is an advanced technology to capture CO2 from greenhouse gas emissions generated during vessel operation, ensuring it is not emitted into the atmosphere. This solution has the potential to play a significant role in reducing CO2 emissions.

Under the terms of MoU, HMM and PANASIA will perform a feasibility study, economic analysis and risk assessment. In addition, the handling process of captured CO2 is one of the vital areas of study. Based on research findings, HMM is expected to install the carbon capture system and perform an operational test on its vessels.

“Carbon capture technologies are one of the alternatives in support of the net-zero ambitions of the global community. We will continue to participate in collaborative partnerships to develop onboard carbon capture solutions on our pathway to carbon neutrality".

As an environmental initiative, HMM unveiled its target of reaching net-zero carbon emissions across its entire fleet by 2050. HMM explores various sustainable energy sources to achieve the target, including biofuels, LNG, hydrogen, and green ammonia.