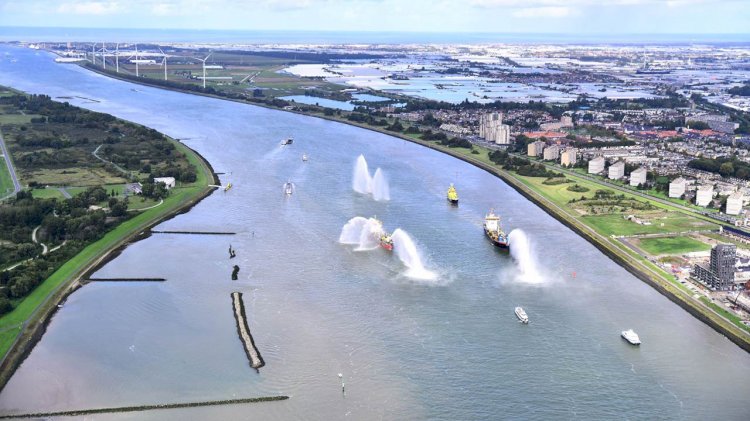 The Directorate-General for Public Works and Water Management (Rijkswaterstaat) and the Port of Rotterdam Authority celebrated the completion of the deepening of the Nieuwe Waterweg and Botlek yesterday. One of the busiest waterways in the Netherlands has been deepened by a metre and a half across a distance of 25 kilometres.

The ceremonial opening of the deepened Nieuwe Waterweg and Botlek was performed by Minister Cora van Nieuwenhuizen (Infrastructure & Water Management) and Ronald Paul, the Port of Rotterdam Authority’s Chief Operating Officer. The opening included a spectacular nautical salute together with vessels from contractors Van der Kamp and Boskalis, a Port of Rotterdam Authority patrol vessel and a Rijkswaterstaat vessel.

The Minister and Ronald Paul are proud of the excellent partnership and the speed with which this challenging contract was completed. The largest sea-going vessels with a depth of 15 metres can now also easily access Rotterdam port’s Botlek area. Minister Van Nieuwenhuizen said:

‘Big, bigger, biggest. We’re talking here about the Aframax, Suezmax and Panamax, mammoth vessels that sail cheaper, more sustainably and safer. In the port sector, big is not only a matter of honour, but it’s also a condition for survival in today’s cut-throat competitive world. That is certainly true for the port of Rotterdam.’

‘That the biggest sea-going vessels can now access the Port of Rotterdam easily is vital to the competitive position of businesses in this area. Port Authority investments are eliciting a wide range of port business sector investments. This confirms our aim to continue to strengthen existing port industry, while also working hard to develop entirely new activities, for instance by investing in the energy transition and digitisation.’

The total joint investment amounted to around €70 million. The dredging activities were carried out while Europe’s busiest port remained open for business. Over 15,000 sea-going vessels navigate the Nieuwe Waterweg every year.