The Antarctic Circumpolar Current (ACC), the only ocean current that circumnavigates the planet, is speeding up. For the first time, scientists are able to tell that this is happening by taking advantage of a decades-long set of observational records. 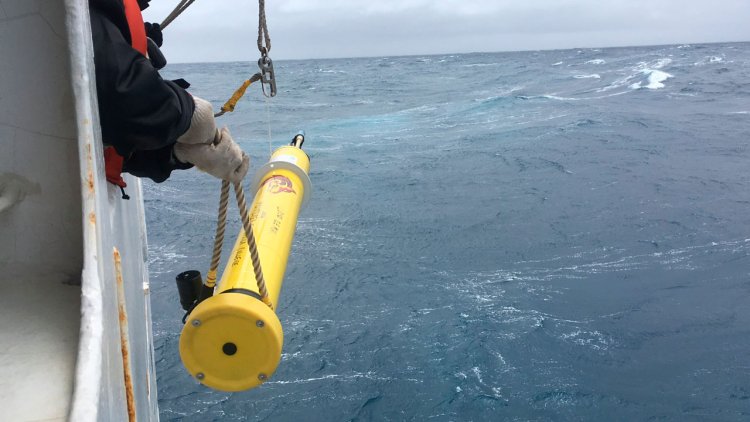 Researchers from Scripps Institution of Oceanography at UC San Diego, Woods Hole Oceanographic Institution, the Chinese Academy of Sciences, and UC Riverside used satellite measurements of sea-surface height and data collected by the global network of ocean floats called Argo to detect a trend in Southern Ocean upper layer velocity that had been hidden to scientists until now.

The team representing the National Science Foundation-funded Southern Ocean Carbon and Climate Observations and Modeling (SOCCOM) project reports its findings in the Nov. 29 issue of the journal Nature Climate Change.

Prevailing westerly winds have sped up as climate warms. Models show that the wind speedup does not change the ocean currents much. Rather, it energizes ocean eddies, which are circular movements of water running counter to main cuurents.

"From both observations and models, we find that the ocean heat change is causing the significant ocean current acceleration detected during recent decades."

"This speedup of the ACC, especially its jet centered on the Subantarctic Front, facilitates property exchange, such as of heat or carbon, between ocean basins and creates the opportunity for these properties to increase in subsurface subtropical regions."

The ACC encircles Antarctica and separates cold water in the south from warmer subtropical water just to its north. This warmer part of the Southern Ocean takes up a lot of the heat that human activities are adding to Earth's atmosphere. For this reason, scientists consider it vital to understand its dynamics, since what happens there could influence climate everywhere else.

The ocean warming pattern is important. When the gradient, or amount of heat difference, between warm and cold waters increases, currents between those two masses speed up.

"The ACC is mostly driven by wind, but we show that changes in its speed are surprisingly mostly due to changes in the heat gradient."

Long-term data capturing changes in the Southern Ocean were hard to come by before the availability of satellite-mounted instruments and the Argo network. That network of autonomous floats, which measure ocean conditions such as temperature and salinity, began in 1999 and reached full capacity in 2007. A full complement of 4,000 floats across the world's oceans continues to collect data to this day. The researchers were thus able to use more than a decade's worth of comprehensive Argo data to distinguish the trend of the accelerating current from natural variability.

Study co-authors said it is also likely that the speed of the current will increase even more as the Southern Ocean continues to take up heat from human-induced global warming.

Study: Ocean current system seems to be approaching a tipping...