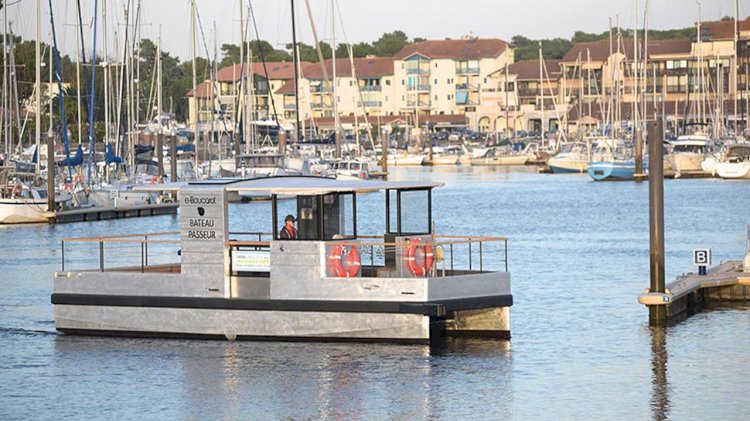 Capbreton is turning to green technologies to reduce pollution of its air and waterways. The popular holiday destination on the Atlantic coast of France saw its first all-electric passenger ferry go into service in July 2019, replacing an older diesel-burning vessel.

The 10-metre aluminium catamaran has a top speed of eight knots and typically cruises at an economical three knots in the harbour. The operator estimates that the boat can run up to 20 hours between shore recharges. L2O Naval, based in L’Orient, designed the ecologically responsible vessel, which was built by Idra Navacco.

“An important goal for us when designing the new eco-friendly boat was to be respectful of the environment. Unlike fibreglass, the aluminium hull is fully recyclable when the ferry comes to the end of its life, and the catamaran hull form improves efficiency by reducing water resistance. And with the Torqeedo powerplant, we’ve reduced air and water pollution – as well as noise levels – to zero.”

Jean-Claude Ollivier, deputy head of the port of Capbreton, said:

“The new solar boat is a popular attraction on the Capbreton waterfront. Our passengers love the experience of gliding silently and smoothly through the harbour under electric power when commuting or touring the harbour.”

“In cities around the world, we see a movement to replace older fuel-burning boats with modern electric boats on urban waterways. Not only does it help reduce pollution, but passengers also enjoy their on-water experience with no noise or smelly exhaust fumes, and it saves money for operators in terms of fuel and maintenance costs.”