A Nova Scotia company has a plan to finally remove the failed tidal power turbine sitting on the floor of the Bay of Fundy by next year. 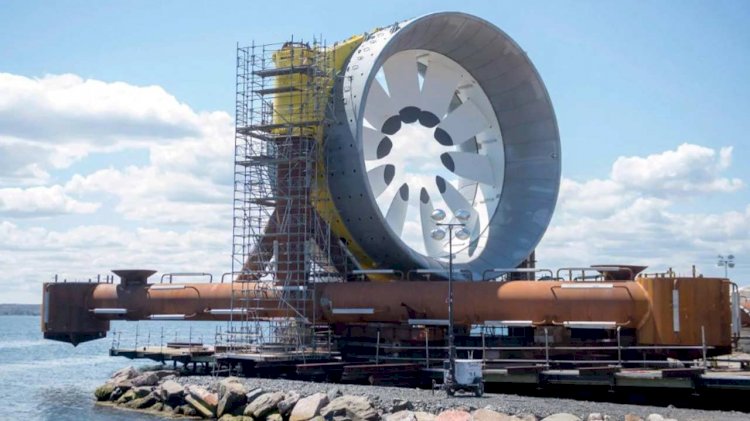 However, it still has to retrieve the failed Cape Sharp tidal turbine from the bottom of the Minas Passage, and has been given until the end of 2024 to do so.

"I think we do have a preferred timeline in mind that's more on the sooner side than the requirements set out by the government. If everything goes according to our plan, we would look to have that resolved and behind us in the next year some time."

Big Moon Power has provided a security deposit of $4.5 million around its commitment to retrieve the turbine.

The 1,300-tonne machine has been stranded in the Minas Passage since 2018 when a parent company of Cape Sharp Tidal Venture, OpenHydro Group Ltd., filed for liquidation.

Until now, most of Big Moon Power's tidal research and development has been done in the community of Scots Bay, on the other side of the Minas Passage near Cape Split.

Jenkins said moving to the Parrsboro location gives the company better access to other infrastructure already in place.

"We can now kind of leap frog some of the requirements that were on us on the other side in terms of interconnection. It's an accelerator for us."

Big Moon Power will be trying to harness the Bay of Fundy's powerful tides on the surface of the water, not on the ocean floor like other failed bids.

One of its original prototypes was a device called a Kinetic Keel. While the idea of the technology the company plans to use at the Parrsboro site is similar, Big Moon has made many modifications.

"The simplest way to describe it is we have figured out how to modernize and create a 21st-century version of a waterwheel. There is a pretty phenomenal opportunity to modernize that, to really improve its efficiencies while kind of maintaining the same principles that we set out to achieve — which is keeping it simple so it's very cost effective and keeping all the components up out of the water."