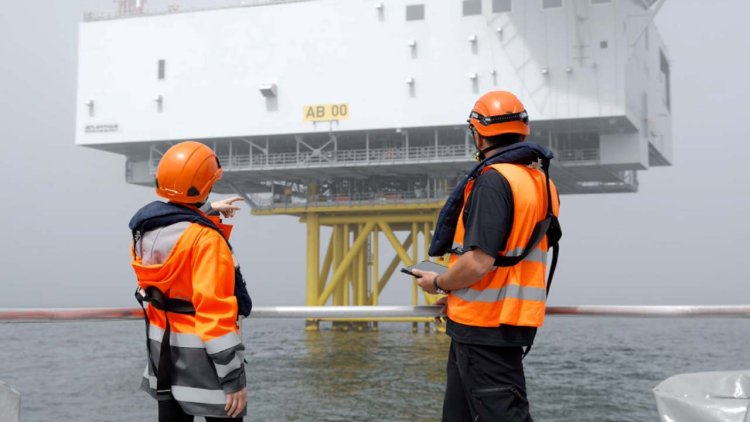 Around 170 kilometres of cable have been laid at sea and on land over the past months to connect two offshore wind farms to the German extra-high voltage grid. Now the last section of the submarine cable is being laid on schedule to complete the second of the total of three 220 kV cable systems.

"Five years ago we announced that we would complete the two cable systems in 2021. Back then, we moved forward ambitiously - and today we can say: we show results! Our Ostwind 2 project is right on schedule. Taking into account that we had to do pioneering work in many places to develop the Baltic Sea as a German offshore wind location, this target was certainly ambitious in 2016. The fact that we are now reaching this crucial milestone as planned not only shows to our project partners that you can rely on 50Hertz."

The Belgian offshore wind farm operator Parkwind will operate the Arcadis Ost 1 wind farm. Parkwind and 50Hertz will operate a joint offshore platform for the wind farm. The installation in the Baltic Sea takes place next summer. The two companies agreed on this in a memorandum of understanding in 2019.

The successful cross-border cooperation was also the focus of the visit of Flemish Prime Minister Jan Jambon and a Flemish delegation to 50Hertz's headquarters in Berlin last Friday.

"We are pleased about the visit of the Flemish Prime Minister to Germany. This is a good opportunity for Parkwind to talk about our first German offshore wind farm Arcadis Ost 1, which will be built with a capacity of 257 MW in the German Baltic Sea. With ten years of experience in the Belgian market and with the support of strong partners such as 50Hertz and DEME Offshore, Parkwind is able to deliver a highly innovative project that sets a new standard for offshore wind power."

With the grid connection project Ostwind 2, 50Hertz is connecting the two Baltic Sea wind farms Arcadis Ost 1 and Baltic Eagle in Lubmin to the German extra-high voltage grid. The wind farms are located between 20 and 30 kilometres northeast off the island of Rügen. Three cable systems will be laid in the Ostwind 2 project: Two cables lead to the Baltic Eagle wind farm, one cable to the Arcadis Ost 1 wind farm. The installation of the third cable system, which is already in production, will begin in 2022.

Equinor partners with BP in US offshore wind to capture...