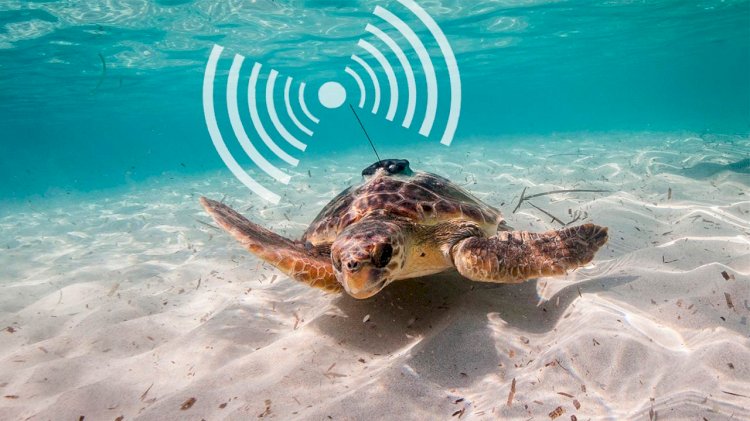 Sharks, penguins, turtles and other seagoing species could help humans monitor the oceans by transmitting oceanographic information from electronic tags.

Thousands of marine animals are tagged for a variety of research and conservation purposes, but at present the information gathered isn’t widely used to track climate change and other shifts in the oceans. Instead, monitoring is mostly done by research vessels, underwater drones and thousands of floating sensors that drift with the currents. However, large areas of the ocean still remain under-sampled – leaving gaps in our knowledge.

A team led by the University of Exeter says animals carrying sensors can fill many of these gaps through natural behaviour such as diving under ice, swimming in shallow water or moving against currents. Lead author Dr David March, of Centre for Ecology and Conservation on Exeter’s Penryn Campus in Cornwall, said:

“We want to highlight the massive potential of animal-borne sensors to teach us about the oceans. This is already happening on a limited scale, but there’s scope for much more. We looked at 183 species – including tuna, sharks, rays, whales and flying seabirds – and the areas they are known to inhabit. We have processed more than 1.5 million measurements from floating sensors to identify poorly sampled areas (18.6% of the global ocean surface).”

“By comparing this with gaps in current observations by drifting profiling sensors (known as Argo floats) we identified poorly sampled areas where data from animal sensors would help fill gaps,”  These include seas near the poles (above 60º latitude) and shallow and coastal areas where Argo profilers are at risk of hitting the land. The Caribbean and seas around Indonesia, as well as other semi-enclosed seas, are good examples of places where Argo profilers struggle because of these problems.”

Tagged seals in the poles have already complemented ocean observing systems because they can reach areas under ice that are inaccessible to other instruments.

The study suggests data collected by turtles or sharks could also enhance ocean monitoring in other remote and critical areas such as tropical regions, with large influence on global climate variability and weather. The researchers say their work is a call for further collaboration between ecologists and oceanographers. Professor Godley added:

“It is important to note that animal welfare is paramount and we are only suggesting that animals that are already being tracked for ethically defensible and conservation-relevant ecological research be recruited as oceanographers. We do not advocate for animals being tracked solely for oceanography.”

The research team included the Balearic Islands Coastal Observing and Forecasting System (SOCIB), the University of St Andrews, the Mediterranean Institute of Advanced Studies and the Spanish Institute of Oceanography. The paper, published in the journal Global Change Biology, is entitled:

“Towards the integration of animal-borne instruments into global ocean observing systems.”